My Peace Corps service has been a dream come true lately. After a year of spreading myself thin trying every possible project with every possible community group, I have been able to identify what works and narrow my focus to some larger, more meaningful and sustainable projects that I am really excited about. I have also developed some lifelong friendships and found where I fit in personally in my community.

My program manager and regional coordinator recently visited my site, met with my socios (work counterparts), learned about my projects, and accompanied me to my very favorite parts of my town. After the meeting, I was filled with pride to be integrated into such a creative, beautiful, and warm community.

At the end of October, I also got the chance to go on a vacation of a lifetime to stunning Arequipa, Peru. Arequipa is located in Southern Peru and is the second largest city of Peru, following Lima. Arequipa is home to one active volcano, El Misti, and two inactive volcanoes Chachani and Picchu Picchu. It is known as “The White City” because of the sillar volcanic rock that was used to construct most buildings in the city.  There are a ton of things to do, eat, and see in Arequipa, so I decided to compile my top 10 recommendations for visiting this historically rich part of Peru.

This is easily one of the most breathtaking places I have been in my life. Colca Canyon is a canyon of the Colca River that is 10,730 feet deep (Grand Canyon is just over 6,000 feet deep). There are tons of options to hike the canyon in 2-4 days and it is a must-see spot in Peru.

Cruz del Condor is a great place to catch a glimpse of the bird that makes up one third of the Incan Trinity. The Condor was believed by the Incans to be the only bird strong enough to fly up to the heavens to communicate with God. It is the symbol of sky. Between 7 AM and 9 AM at Cruz del Condor, it is possible to catch this huge bird gracefully flying over the Colca Canyon. We got super lucky because the morning we went there were tons of condors sweeping in and out of the canyon.

Yanahuara is a quiet and colorful neighborhood outside of the city center of Arequipa. There are great restaurants, architecture, and viewpoints of the entire city. You even get a clear view of the city’s three volcanoes.

Located right in the center of the Plaza de Armas, La Catedral de Arequipa is one of the first religious monuments of Arequipa, but has been reconstructed numerous times because of all of the earthquakes in the area. It is made almost completely of volcanic rock and is completely breathtaking architecture as you approach the plaza and spot the two towers from a distance.

This monastery is more than just a religious building, it is an entire city within the city of Arequipa. It has its own streets, houses and buildings that serve specific purposes. The guided tour was definitely worth the S/20 extra because we learned about the stories of young girls from wealthy families who were sent to Santa Catalina to devote themselves and their lives to God. The women were not permitted to leave the monastery walls. After our tour, Jorge and I got lost in the monastery for hours exploring each of the rooms and stopping at the monastery’s coffee shop for a local Arequipeña soda, Kola Escocesa.

Ricoto Relleno, Pastel de Papa, Soltero de Queso, and Chicharron de Chancho are all must-try foods of Arequipa, so we decided to try them all in one stop at La Nueva Palomina. Arequipa is famous for its Picanterías, which are restaurants that serve traditional, typically spicy, dishes.

This was my favorite exhibit that we went to in Arequipa. Unfortunately we couldn’t take pictures inside the museum, so I stole the one below from Peru for Less Blog. This young Incan girl was a sacrifice at the top of volcano Mount Ampato where she was buried in ice for over 500 years before being found in 1995. Because she was frozen, all of her organs and hair are still intact, so scientists have been able to learn a ton about Incan culture and tradition from this young girl’s body. She still sits in a freezer of ice at the Museo Santuarios Andinos close to the Plaza de Armas of Arequipa.

You cannot go to Arequipa without trying its very own artisanal Queso Helado. Sounds crazy, right? Cheese Ice Cream? It actually has no cheese in it at all! It is made of milk, coconuts, cinnamon, cloves, sugar, vanilla, and egg. We went the street vendor route, but there are tons of restaurants that serve this traditional dessert, as well.

Jorge and I decided to take a bus about 4 hours away from the city center to enjoy some of the nature surrounding the city. Our first stop was a tiny town called Chivay where we had a quick lunch of alpaca saltado in the Plaza de Armas before heading to our refuge built into the side of towering cliffs. This hotel is well known because it is host to private hot springs that can be enjoyed by the guests. Jorge and I loved relaxing in the hot springs and even managed to wake up at 5 AM to soak in the natural minerals of the water.

I will forever be in awe of the beauty of textiles in Peru. No matter where I go, the traditional dress of women makes me completely fall in love with the culture. Arequipa has the most ornate and colorful textiles I have seen yet in Peru! I was speaking to one woman on a bus, and she told me the average cost for an entire outfit is over S/2500 or almost $800 USD! 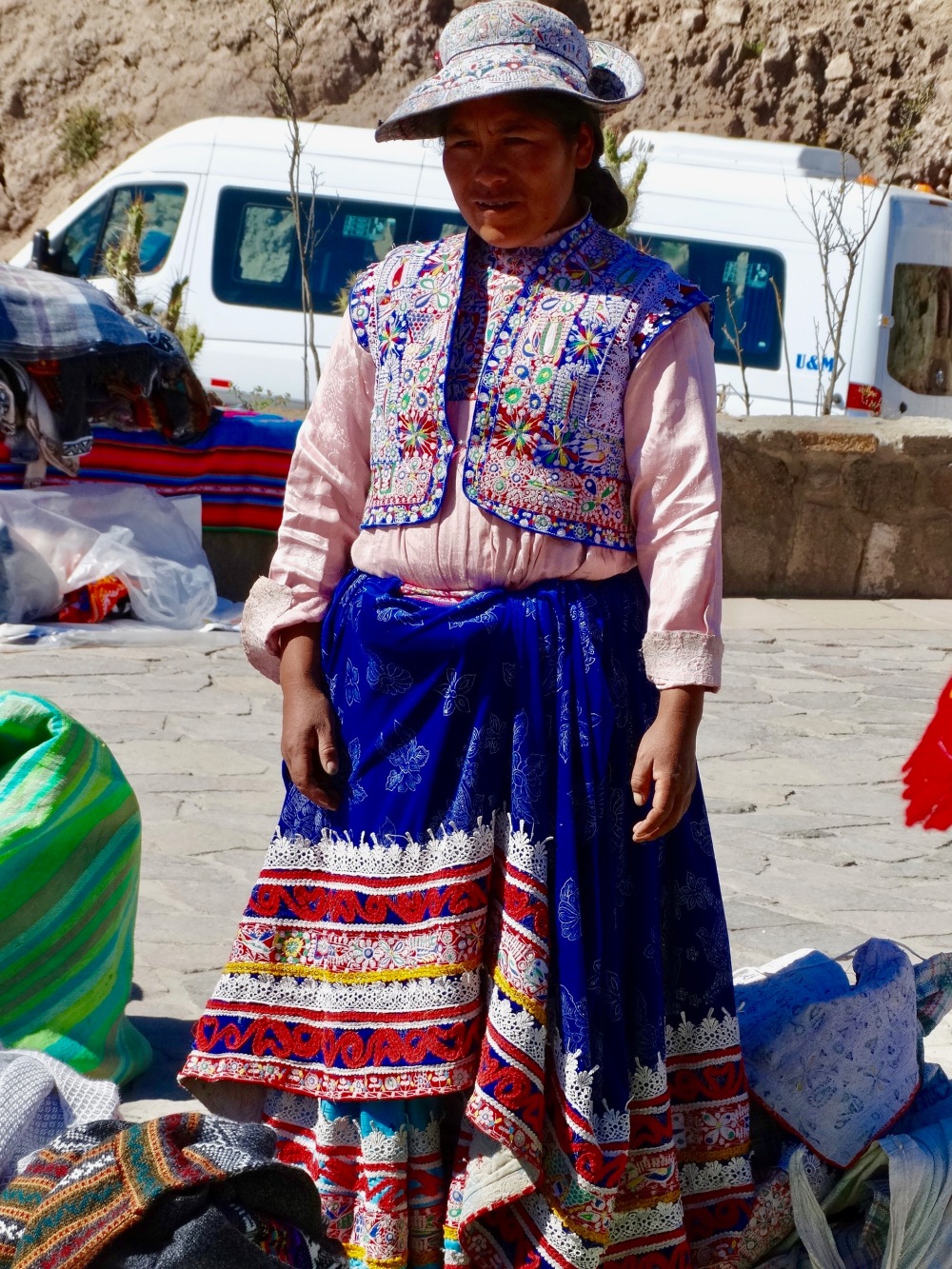 I am now back in Chacas wrapped in a warm blanket and drinking a hot tea reminiscing about my days in the hot sun of Arequipa. Arequipa was a completely magical experience and I feel so grateful for another opportunity to explore a different part of Peru. Every place I go, I fall more in love with the traditions and culture of Peru. 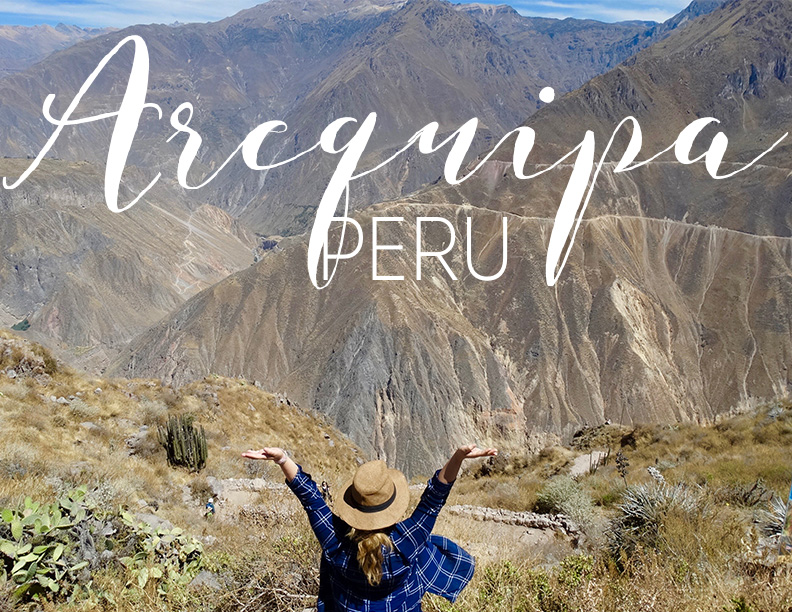