Carnaval is upon us! In Ancash, this is the time for dodging flour bombs and dancing to the constant beat of the Huayno drums. Sheer happiness clouds the air as people dance and laugh and drink to celebrate this time.

Everywhere celebrates Carnaval slightly differently, but this year, I spent the celebration in one of the caserios of Chacas, called Jambón. This is a tiny town with one building that serves as the preschool, primary school, and secondary school. Everyone knows each other and there is a real community feel.

Of course, I had no idea what to expect, so per usual, I just rolled with the flow. I had already eaten lunch when I arrived, but as soon as I walked in I was greeted with a first course of soup and a second course of pork with rice and potatoes. I had to eat a second full lunch as to not insult the hosts. Everything was washed down with chicha, a fermented corn drink that is popular in my part of Perú. During lunch, drummers played and people danced Huayno in front of the Virgin to prepare for the evening’s activities. 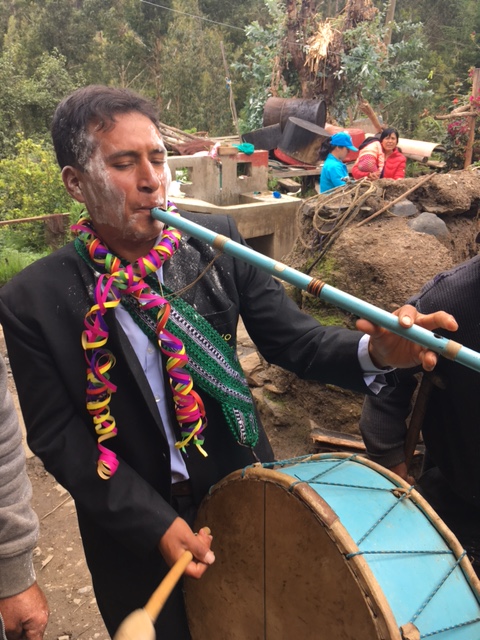 After lunch, we formed a procession where everyone followed the band to the big tree planted in the plaza of Jambón. By the time we reached the plaza, I had enough flour and water thrown on me that you could have made a cake if you added a little sugar. I looked up and there was a tree decorated with mantas, balloons, clothing, and household items. It was pretty amazing.

Quickly, a circle was formed around the tree, where everyone was dancing as one person with an ax started chopping away. One by one, we all had an opportunity to take our jab at the tree. A lot of new words were thrown my way, and I just nodded and smiled. What’s the harm in that, right? Well, as the tree was about to fall over, I was handed the ax and told that I could take the last swing. So I did. I swung as hard as I could and the tree toppled over onto all the people. There were screams as people were diving on top of the branches to collect the gifts that fell with the town’s centerpiece. (There is video evidence, don’t worry.)

Next thing I know, everyone is kissing me on the cheek and wrapping me in their arms with a huge congratulations. I had no idea what was going on. I was taken over to have my photo taken with the Virgin and everyone wanted their pictures with me. I finally asked a woman I had met what was going on, and she explained the tradition of chopping down the tree. Apparently, if you are the one to take the final swing, you are in charge of next year’s fiesta. That means, I will be responsible for cooking, decorating, the band, EVERYTHING for next February. 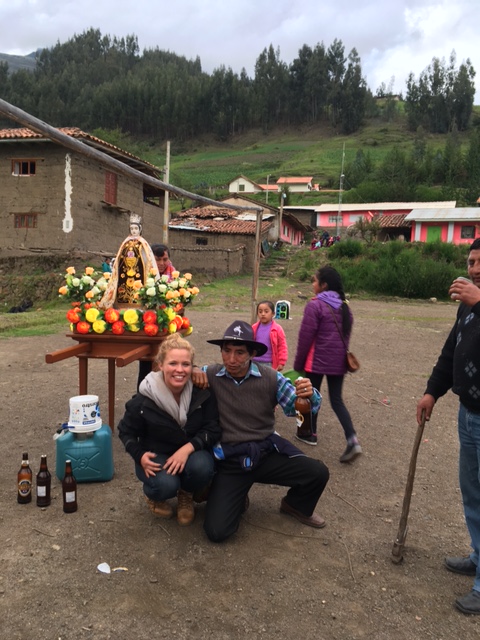 I looked at my student and said, “Marly! Why didn’t you tell me this!?” She looked at me and said, “Ohhh Miss Caron. I told you SO many times!” Oops…