When we think of Perú, we think of Machu Picchu, right? The ancient culture of Perú has been incredibly fascinating to our modern civilization and has inspired research, literature, and tourism of the mysterious life of 15th-century Incans.

What I have discovered by living in Perú is that there are actually ruins that date back way before the Incans all around me! In fact, there are pre-Incan ruins a stones throw from my house in Chacas, called Pirushtu.

The most famous ruins of Ancash are called, Chavín de Huantar in Huari, and are a UNESCO World Heritage site. I was invited on a day trip to explore the ruins by Padre Fabio, an Italian priest of the Don Bosco Schools, and Jorge, my Operation Mato Grasso volunteer friend. I asked my fellow Ancash Peace Corps Volunteer, Jessica, to join me and we left at 5 in the morning to take the four hour drive to the incredible site.

We spent the day exploring Chavín, which dates back to 3000 B.C. and was occupied by the Chavín culture. The site is full of artifacts and ruins that tell stories of what life was like in the past. Unfortunately, being volunteers and all, we didn’t have enough money to pay for a guided tour, but luckily,  our Peruvian friend Jorge somewhat paid attention in his history classes and was able to recount some of the historical facts for us.

The Cabeza Clava in its original location at the Castillo de Chavin. This is the only remaining head in its original place, but there were originally 42 heads in total all representing mythical creatures of the Pre-Incan times. 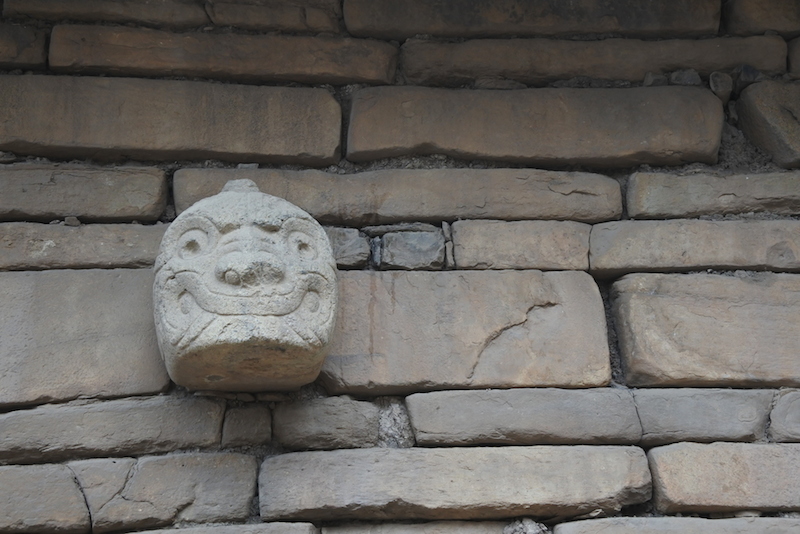